What is IO-Link Wireless?

Wireless data communication networks are increasingly being used to replace slip rings to transmit data at critical connection points in non-stationary systems. They reduce the installation time and increase reliability of data transfers. A prime example of such communication system is IO-Link Wireless.
The IO-Link Wireless standard provides a reliable, real-time deterministic protocol for control systems in industrial factory automation. It can be used to transmit data and signals from switching and measuring sensors and from simple actuators. Process Data 2 bytes or less in size is collected and forwarded to the control system. With the application of IO-Link Wireless, traditional cables in industrial control applications can be extended with wireless transmission paths. This approach increases reliability and flexibility of the resulting system.

IO-Link Wireless is based on the standardized IO-Link technology (IEC 61131-9) and offers the same communication reliability (packet error rate of 10-9) as the wired version. This flexible and cost-effective solution can be embedded in an existing infrastructure with little effort. It is a solution that can initially be deployed over a small area and later extended as needed. The total cost of a system determines the success of the new technology, especially when large numbers of devices are involved. IO-Link is a low-cost technology.  In this system, devices communicate directly with the controller through an IO-Link master. This approach ensures a reliable and stable connection from master to device. This means that IO-Link can effectively be used in time-critical applications. 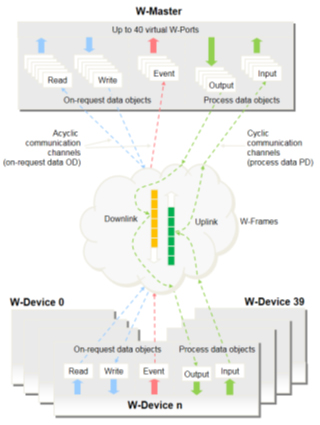 To handle a large number of devices, a master can contain up to 5 transmission channels, each of which supports up to 8 devices. This means that a total of 40 wireless devices are possible per master. Since three masters can operate in parallel in one cell, a maximum number of 120 devices can be located in a single cell. A scan service ensures that 'unpaired' devices can be added to the system. For mobile devices, there are no limits on the speed at which these devices can move within a cell. A defined handover mechanism ensures controlled roaming of devices between different masters.

Important for the user: There is no difference in the processing of wired IO-Link information and of IO-Link Wireless data. The application interface for the cyclic data (process data) and the acyclic data (on request data) is compatible with the existing IO-Link description. IO-Link Wireless uses the 2.4 GHz ISM band RF transceiver. The 2.4 GHz band is divided into 80 channels, each spaced 1 MHz apart. Coexistence with other wireless systems is ensured by a blacklisting mechanism. For example, certain channels known to be used extensively by other systems can be masked out before IO-Link Wireless is commissioned for use. Within this channel management scheme, frequency hopping can further be applied. This achieves a bit error probability of 10-9, which is equivalent to similar wired systems. In the future, low-power devices will also be supported by the system with the projected cycle time of 5 milliseconds. To follow regulatory requirements, transmission power is limited to less than or equal to 10 dBm (10 mW) EIRP. Even with these power limitations, a transmission distance of 20 meters is achieved within a master cell with one communication channel. When more than one communication channel is used, a distance of 10 meters can still be achieved.