In order to make data from the IO-Link level usable in higher-level systems or cloud-based services, gateways are used, which carry out a protocol conversion according to predefined rules. This protocol conversion is generally referred to as vertical data integration and should be as seamless and simple as possible. A specification for a demand-oriented and continuous protocol conversion (also called mapping) should standardized support for all use cases relevant to automation, such as:
• Transferring measured values
• Reading and writing of device parameters
• Configuration of masters and sensors/actuators
• Recording of diagnostic messages
• Parameter interpretation via the IODD

The IO-Link community has developed and specified two mappings for vertical data integration: one according to OPC UA and another to JSON via REST or MQTT. 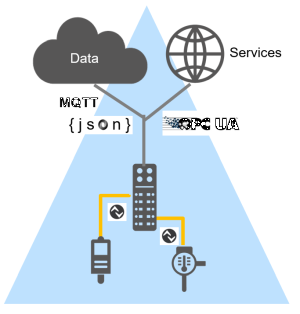 IO-Link over OPC UA will expand the range of possible automation solutions as a fieldbus-independent integration. The data can now also be accessed and used in a standardized way by OPC UA clients, such as ERP systems, outside the classic automation pyramid. The mapping was defined in cooperation with the OPC Foundation in the document "OPC Unified Architecture for IO-Link Companion Specification".

JSON is a very simple data format that can be transmitted via a so-called Representational State Transfer (REST) API or also via MQTT. The exchange format is very lightweight and significantly less resource-intensive than OPC UA. This means that data from and to the IT level can be transferred and used seamlessly in a way that is easy to interpret. The contents and semantics have been specified for the two transport mechanisms REST API and MQTT by the community in the document "JSON Intergration for IO-Link".