This year’s IO-Link Members’ Assembly took place on June 23, 2022 in Frankfurt am Main. One of the most important items on the agenda was the regular election of the Steering Committee.

Another highlight on the agenda were two application reports from end users. Attending for the second time, Horst Klesse again contributed to making the IO-Link Member’s Assembly a success. Back in 2017, he had demonstrated the use of IO-Link at his company’s bottling plants for the first time. This time around, he impressively demonstrated what elopak has since been working on with regard to IO-Link, as well as the challenges tackled and solved by the IO-Link Community for users.

Dennis Lenkering demonstrated the use of IO-Link at the Lenkering Montage und Zerspannung-stechnik GmbH company in Steinfeld, Germany no less impressively and explained the background, advantages and experience as a system integrator of IO-Link with various use cases, such as gluing automation.
At the end of May, the IO-Link Community welcomed TÜV Süd as its 400th member. It was a special pleasure for that also Günter Greil of TÜV Süd could be welcomed on site in Frankfurt. For many years, the company has been engaged with IO-Link technology and is a leading driver of IO-Link Safe-ty. It would also like to support this technology as a test lab for IO-Link Safety in the future.

To inform all participants about the latest IO-Link goings-on, the working group heads reported on the status and activities of their working groups.
You were not able to attend? No problem, just have a look at the recording of the members assembly on YouTube! 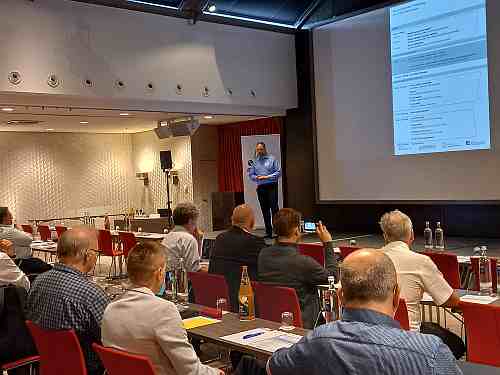