Nearly 90 participants brought their latest product developments to test their devices and software for interoperability with other manufacturers. 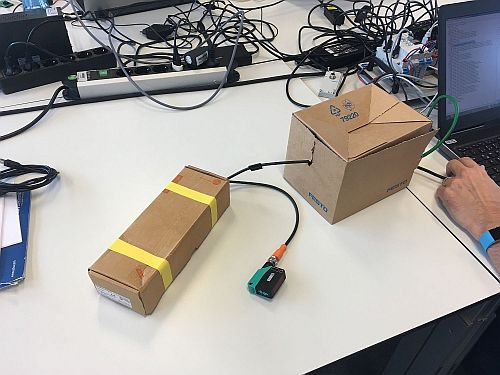 The IO-Link Community met for joint testing at an IO-Link Plugfest at Festo in Esslingen on October 16/17, 2018. Nearly 90 participants brought their latest product developments to test their devices and software for interoperability with other manufacturers. The motto here was: test as much as possible, reveal as little as necessary. Some were very inventive (see photo) when it came to protecting their innovations from the curious glances of the competition. This demonstrates, however, how little effort is necessary to thoroughly test devices even during the development stage.

Particularly pleasing was the strong level of international interest. There were seven participants at the event from Japan alone. This is in line with the experiences of several German providers of IO-Link basic technology who can hardly handle the numerous inquiries – particularly from the USA and Southeast Asia – and expect a further significant increase in IO-Link node counts.

In addition to DataStorage and test systems, focus this year was on testing the first implementations of the new firmware profile. At present, IO-Link is the only communication protocol that supports a uniform, vendor-neutral, firmware update mechanism. This simplifies the updating of device software, since firmware updates can be performed faster and easier.

IO-Link Plugfest takes place once per year at alternating locations in Germany – with growing numbers of participants. To meet the strong interest in Southeast Asia, Plugfests are also being planned for Japan.